Peter Dickinson has written over fifty books for adults and children. Many of his books for adults are mysteries. His first book, Skin Deep (aka The Glass-sided Ants' Nest) featured Detective Inspector James Pibble of Scotland Yard and won the 1968 CWA Gold Dagger. The second book in the series, A Pride of Heroes, published the following year, also won a Gold Dagger. Much of his fiction for children is science fiction or fantasy.

The James Pibble series was only six books, published between 1968 and 1979. The remaining mysteries written by Dickinson are stand-alone novels.

The Last Houseparty, published in 1982, moves back and forth between the early 1980's and 1937 and 1940. At times this can be disorienting, but I enjoy that type of structure in a novel. The story is about an aristocratic family which has fallen on hard times and most of it is set at a grand English estate owned by Lord Snailwood. The description of both time periods is well done. I would not describe the characters as likeable, but they are interesting. The characters in Dickinson's books are often strange. 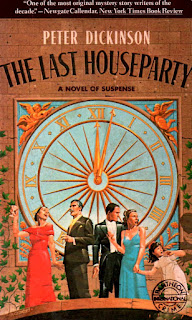 Peter Dickinson is one of my favorite authors. I haven't read a book by him in quite a while, and I was looking forward to this one. I enjoyed it all the way until the end. And then I was disappointed. But don't let me scare you off. This is what Ruth Rendell had to say about this book (from Peter Dickinson's website):


“The Last Houseparty is so subtly done and so cunningly constructed that I felt I wanted to read it twice in order to get the full satisfying joy of it, I could have read it a third time immediately afterwards without hardship. He sets new standards in the mystery field that will be hard to live up to.”

Do I recommend reading books by Peter Dickinson? Yes, emphatically. His prose is beautiful. His stories are intriguing. My favorite book by Dickinson is King & Joker, an alternate history set in an England where George V's elder brother did not die but lived to become King Victor I, and is later succeeded by his grandson, King Victor II. The story is told from the point of view of his teenage daughter, Princess Louise.

Do I recommend reading The Last Houseparty? Yes, with reservations. The subject matter is related to an unpleasant crime, against a child. Some readers don't want to read about that type of crime. It is not dwelled upon and I did not find it disturbing. The ending was somewhat unsatisfactory to me.  I don't regret reading it myself, but I don't want to push this book on unsuspecting readers.